(Bug-eyed Fear image © FuzzySkeletonian.com, sticker effect © Redbubble.com)
Okay, I’ve been trying not to make a big deal out of this but I finally got to the point where I had to come right out and say something.  I’ve been adding my work to my Redbubble account and they sell stickers with your artwork printed on them if you want them to and OH MY FUCKING GOD THIS GUY IS SO DING-DANG CUTE AS A STICKER!!!  You may remember him from this post where I was trying to pass him off as an ominous symbol of fear but, no, he’s not scary, he’s a cutie pie!  Just click on the image to check him out on the Redbubble.  Also, check out my Store page for more of my works if you’re curious. 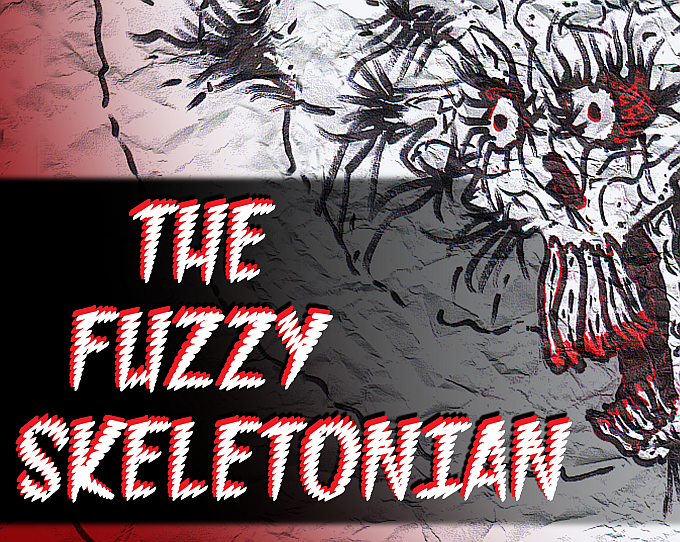 Oh my word have I been a great big huge procrastination pants lately!  Friend and fellow perpetrator of art Jesse Campbell was awesome enough to create this banner for my site a while ago (you may have already seen it over at ZOMBIE BITES in the side bar) and I am just now getting around to presenting it here.  I know, right?

Anyway, I’ll stop beating myself up about it and just say this is a pretty fucking awesome banner and I’m very proud to offer it to all who may favor my site with their presence.  Grab it up, shrink it down and plonk it in your side bar and, most of all, give Jesse some thanks, some cash or at least a thoughtful comment on his work.

That’s it for now.  I hope to increase my posting frequency in the future so check back later for more and thanks for stopping by!

(click)
So I was watching an episode of Adventure Time called “The Jiggler” (spoiler alert!) where Jake and Finn unwittingly lure a baby creature away from its mother and take it home with them.  The baby soon gets sick and basically starts puking blood.  Instead of getting help for the poor thing they ultimately decide that all they need to do is plug the hole it’s puking from but the creature has multiple holes on its body it can puke from so they resort to using their collections of glass eyes and eye patches to plug all the holes in an attempt to stop the puking.  This was very troubling to me since my abusive fuckhead father had worn a glass eye when he was younger and by the time I knew him always wore an eye patch.  So here Jake and Finn have sacrificed their precious collections in a effort to “save” this baby.  Moments before the young creature explodes from their gross mistreatment of it, they show a shot of it as a quivering mass with glass eyes shoved into its holes and eye patches strapped around its body, sitting in a puddle of its own puke-blood while still slowly leaking more puke-blood from its many plugged holes. Needless to say, I was more than a little disturbed at this point.  When the creature explodes it doesn’t die.  Instead, puke-blood goes everywhere and it gets all stretched out like a big rubbery noodle.  So now our intelligent heroes panic and decide to gather up the sick, exploded, noodle baby into a pile and just smash it all back together as if it were just a bunch of modeling clay.  Maybe I was taking things a little too seriously but by this point I was a little horrified and experienced a legitimate stress response in my gut.  Miraculously, smashing the baby back together using brute force doesn’t kill it and after all the kidnapping, abuse and attempted murder they eventually return the baby to its mother.

Now, while I’m a both a fan and creator of disturbing imagery and have great respect and admiration for anyone who can effectively illustrate the weird and stupid things that can happen in a surrealistic dream-like state (pretty much the core of what Adventure Time is about), this particular episode really hit just a tad too close to home for me.  Anyway, long story short:  I watched “The Jiggler” and afterwards I drew the image you see above.

Subscribe via RSS or have my posts sent directly to you by email.  So exciting!